22 Years Ago I Watched Nirvana Play In Detroit 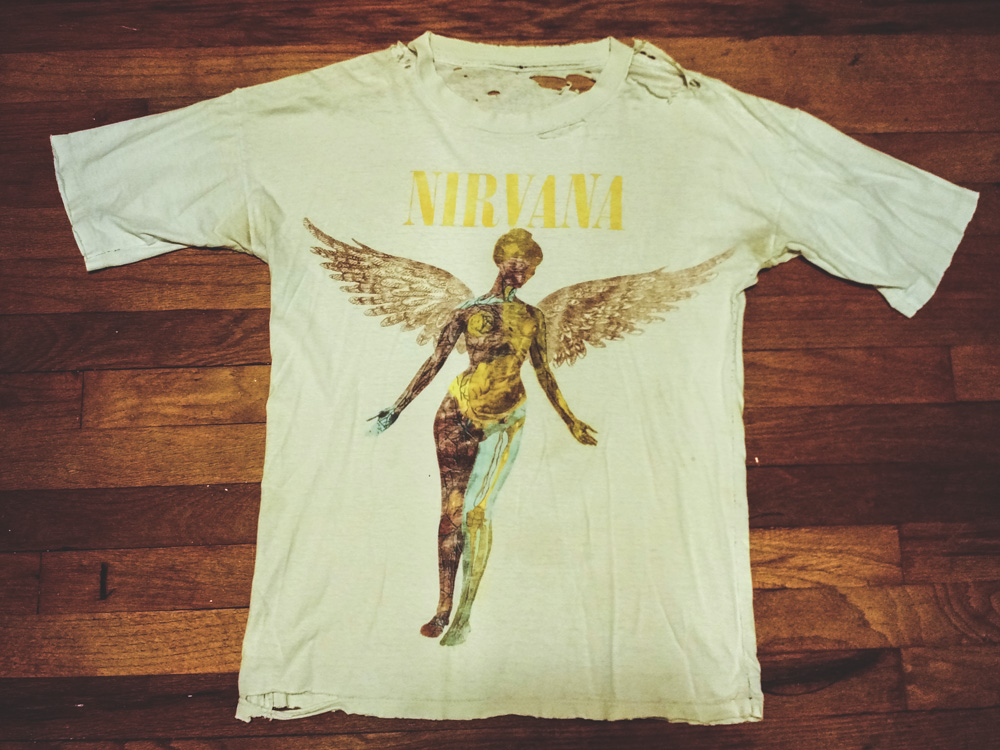 Listen to "Radio Friendly Unit Shifter" from this show while you read.

Today marks the day that I was grounded for what felt like a month in 1993. It was October and I was a defiant, gumpy, uncoordinated, awkward fifteen-year-old high school sophomore.  I was living with my mom and her boyfriend in the suburbs north of Detroit who were both blue collar workers, a postal carrier and factory worker, respectively. So a couple years prior when I was thirteen, after coming home from an annual summer visit to Colorado, my mom conveniently mentions that I’m to get a job…. and oh, here’s the application for the job you’re going to work.

I’m not sure if you’ve ever worked in a restaurant. Or as a busboy in a restaurant. But it stinks in every way you can imagine. Then multiply that by working in a Mexican restaurant and coming home smelling like cigarettes (yes, there was still smoking in restaurants then), greasy lard and salsa. Don Carlos was owned by fairly awful people, and operated by amazing people. It was connected to and shared a bathroom with a dive-bar called the Alibi Inn. It contained all the usual flair of a midwest corner bar: Budweiser flags, Miller High Life framed mirrors, ice filled toilets in the shape of bathtubs in the mens room, and an amazing/awful/amazing  cover band called Leather & Lace. I couldn’t tell you how many times I’ve heard the song Black Velvet hacked together while I slung burritos and scraped filthy plates of uneaten refried beans with a cigarette butt sticking out like a planted flagpole from a regretful expedition. This $3 an hour job at Don Carlos and Alibi Inn, would prove to pay off for the night… and be my alibi. 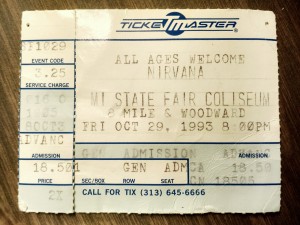 In Utero had just dropped only a month before and my circle of weirdos probably listened to it a hundred times already. We were all a little obsessed with music I’d say. Maybe I was a little more. Nirvana was one group I probably obsessed over more than others. We had every KTS bootleg, unreleased song, import maxi-cd and b-side that was available. This was before everything was online and the CDs were all imported and hard to find. Even most of the “new” stuff released on the Montage of Heck soundtrack or With The Lights Out was already released by this time.

So when I was told by some friends that they had an extra ticket for the upcoming Nirvana show, I jumped on it. I didn’t know how I would be able to go, but I would. One thing that was certain was that my mom wasn’t letting me drive down to Detroit with some other kids and go to a concert without any adult supervision. Most of us at least a few years from eighteen.

By this time, I’d only gone to one other concert that my Dad took me to in 1991 to see ZZ Top and The Black Crowes. That show was filled with skunk weed smoke, conveyer belts and a laser show of nude mudflap girls. Pretty hokey stuff, but hey, it was my first rock show. Then in 1992 my aunt tried to coax my mom into letting her take me to see the Guns N Roses and Metallica tour that ended in chaos and riots. So that was a resoundingly wholehearted “no way”. Knowing the outcome of that situation, I wasn’t going to let that happen with Nirvana.

I  was very familiar with the Michigan State Fair Coliseum by thirteen. My best friend’s dad was a Shriner so whenever the circus came into town we got to spend 10 hours selling fries and watching the tightrope walkers dramatically almost fall at the exact same moment of every show. Mostly we just made-out in the nosebleeds with a couple of girls whose dad’s were also working. The place reeked of elephant turds and popcorn. Before that, the only other time we’d frequent the coliseum was to see some horses gallop around during the State Fair. Again, reeking of horse turds and popcorn.

Walking into the coliseum on October 29, 1993 was like walking into a circus of an alternate universe. The buzz in the room was overwhelming. The new smell of sweat and patchouli wafted through a mass of angsty, confused teens. Punk shirts of bands I’d never heard of worn by other kids I’d never seen. All these people confirming that our little circle of friends wasn’t so little. We stood afar on the main floor to watch The Boredoms jump and smash into each other onstage and The Meat Puppets (or Brothers Meat) open the show. I found out just recently that Bobcat Goldthwait also opened and we must have missed that because I have no recollection of it. A comedian playing to a rock show has got to be one of the hardest things. No one is there to see them, no one is there for comedy and everyone tends to heckle at these shows. Bobcat recently wrote some great liner notes for the reissue of In Utero of the tour.

By the time Nirvana came on we were deep in the crowd. What I’m about to say is going to make me sound old but it’s absolutely true because I still go to shows: Kids at shows are boring as fuck now. Everyone stands around taking shitty cellphone photos (with their flash on for some reason) barely even moving. There’s no crowd surfing, no stage diving, no smashing of gear. I’m not sure if this is the fault of youth or the fault of music today. These types of shows were scary and exciting. Your toe gets stepped on at the same time someone is pushing you and there’s nothing you can do except lean on another person behind you hoping your shoe doesn’t get ripped off and whipped into the crowd. Meanwhile there’s people jumping on top of your head crowd surfing while you’re trying to avoid the fat, hairy, sweaty dude starting a circle pit by himself. There was always that sense of camaraderie when you see the fallen in the middle of the floor. You swoop them up and keep going with the music. At one point while being tossed on my back over the hands of strangers I looked up for an instant while huge strobes of light filled the entire coliseum. For that brief second you see the rafters along the ceiling filled with crows flitting quickly across the air. Every face in every seat is visible for that sliver of a moment. Then the light turns off and it’s black again. Someone actually hit Kurt in the face with a boot and he threw it back in the crowd ending the show. It seemed like it was over so fast. 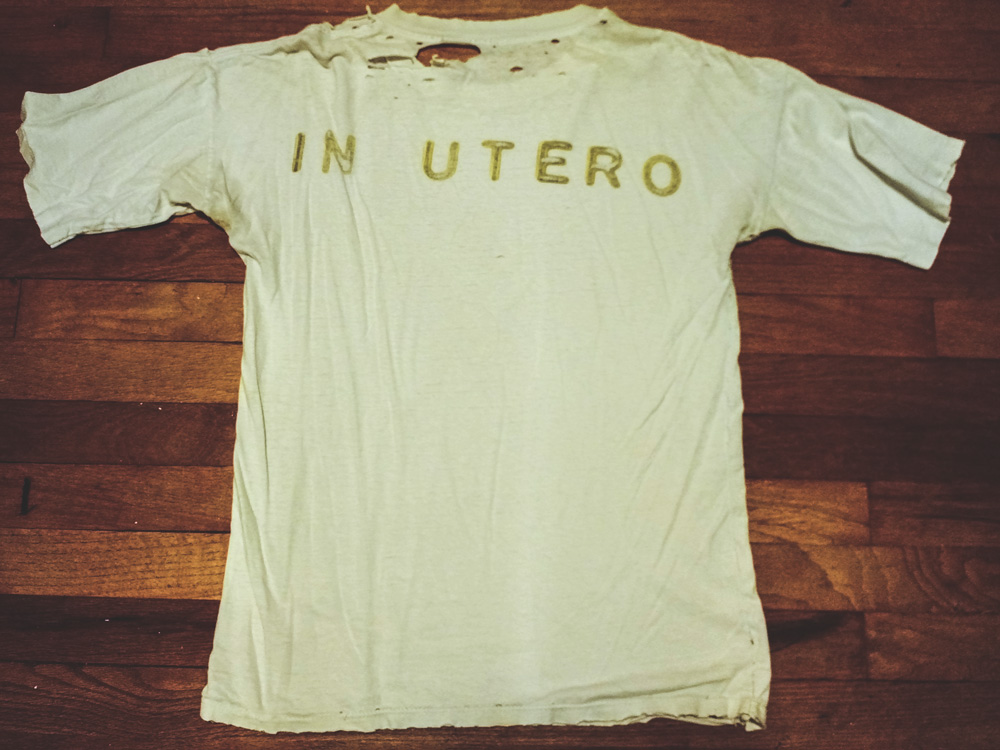 I left with an In Utero shirt, ringing ears and many bruises. What I didn’t know is what was waiting for me at home. Like a TGIF sitcom, I try to sneak in the front door and mom is sitting at the kitchen table already on to my little plan. She decided to go to Don Carlos earlier that night for a carry-out and pretty quickly found out that I wasn’t working at all. Needless to say, she wasn’t pleased. I was grounded. Not sure what I did that Halloween, but probably not much. Not much for the next month actually. Less than a year later, Kurt was gone and to my surprise my mom tells me she’s glad I got to see them play.

Now I live in Seattle, I still have my ticket stub and I still wear that same In Utero shirt I bought at the show.

Listen to the whole show HERE.